CHURCH OF THE COSMIC SKULL

Church of the Cosmic Skull are not only one of the most exciting rock bands in the world today, but also an ever-growing spiritual organization, spreading the light of the Cosmic Rainbow across this planet and beyond.

The Church released their third studio album ‘Everybody’s Going To Die’ in November 2019 on limited edition heavyweight vinyl, CD and cassette via their own label Septaphonic Records. The Nottingham based ‘spiritual organisation’ continues to astonish listeners and festival audiences across Europe with their unique blend of prog, psych, rock, and ‘Occult Pop’.

Since their 2016 debut ‘Is Satan Real?’, electric viola, piano and Rhodes have been introduced alongside the Hammond organ and six-part vocal harmonies, resulting in a sound that truly ‘puts the ABBA in Sabbath’.

The decision to remain independent is a reflection of both the changing landscape of the music industry, and the Church’s wholeheartedly DIY approach, having turned down major label offers in favour of starting Septaphonic Records and their own live events company, Cyclopean Productions. Quoting one of the ‘7 Objects’, Church founder Brother Bill Fisher describes this as a chance to ‘Celebrate and uphold the freedom of art, science and thought.’

Early 2020 brought an astounding UK tour before visits further afield -including the USA- were temporarily postponed as the world paused. They continue their ‘Tele-Vision’ output with mind-blowing new music videos, and invite all living beings to join the Cosmic Family on the ‘Psychic Ascension To Humanity’ via their internet web-portal: cosmicskull.org. 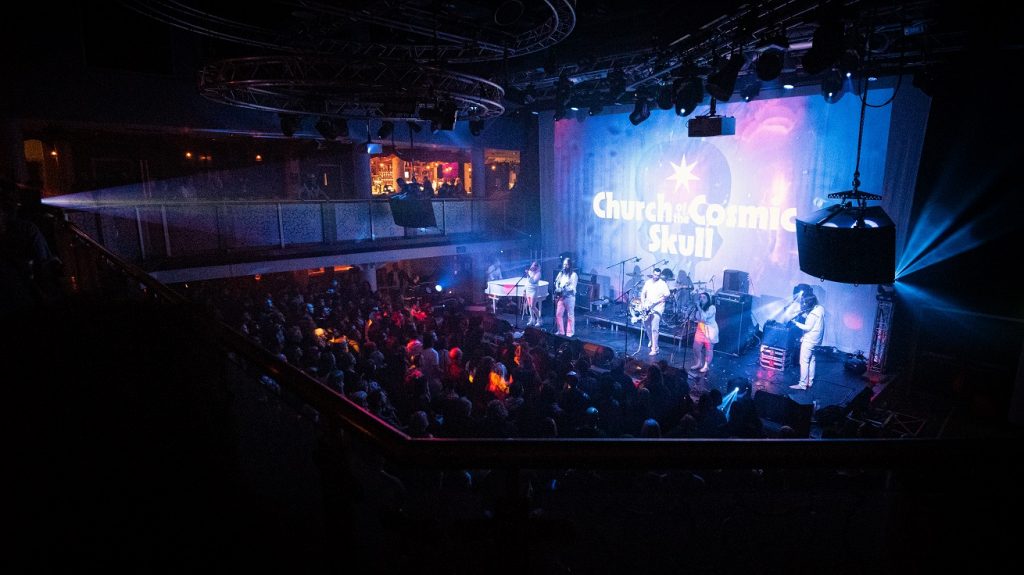 LISTEN TO CHURCH OF THE COSMIC SKULL ON SPOTIFY